WinSCP allows you to seamlessly encrypt your files on an SFTP server using AES-256 encryption.

As part of session settings, you can specify (or have WinSCP generate) an encryption key. WinSCP will then (by default) seamlessly encrypt all newly uploaded files and their names.

In WinSCP file panel, you will see the original file names and when you download files, you will get original contents. But anyone else, who does not know the key, including a server Administrator, will see only gibberish.

This, combined with WinSCP powerful synchronization features, allows you to use your server quota as a safe backup storage for your private data. 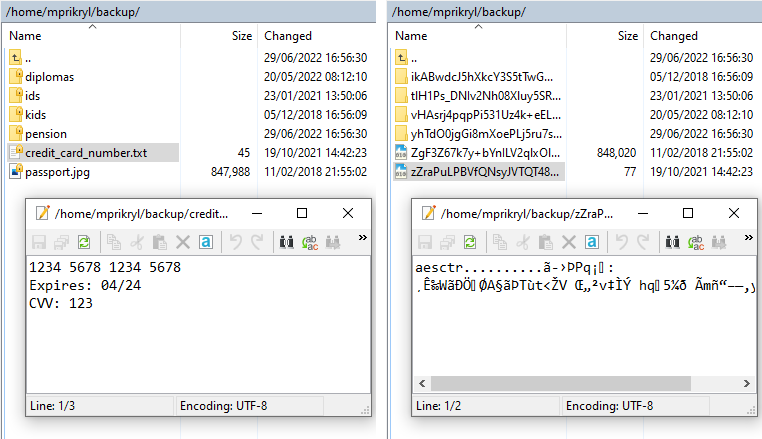 You can identify encrypted files and folders using a lock overlay icon.

The file system also needs to support reasonably long file names. Base64 encoding adds a 33% overhead to a filename length. Additionally, an encoded salt and the .aesctr.enc extension add another approximately 33 characters.

With common 255-character limit of common NTFS and ext file systems, file names up to 167-characters long can be stored.

To encrypt file names and file contents, WinSCP uses industry standard AES-256 CTR encryption. Use of standards guarantees you, that even if WinSCP stops working or becomes unavailable for whatever reason, you will still be able to decrypt your files.

File modification time is stored as is (not encrypted in any way). Encrypted files are 32 bytes larger than originals. Hence size of an original file can also be deduced.

We provide a standalone PowerShell implementation of file decrypting.