Sometimes when you click in the file area, it will scroll instead of clicking the file you're trying to click. That's word soup so here: 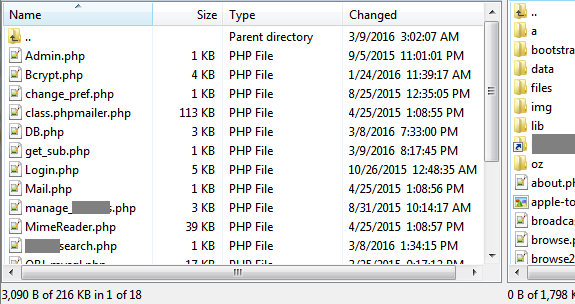 Imagine, as you double clicked a file on the left, it suddenly scrolled down 3 lines. It could cause you to click the wrong file. Today it happened and it took my site down. A file went someplace it shouldn't have, and due to behaviors in PHP that took me some time to understand, it broke everything. (What actually happened was this file moved up a directory, but it was still in the include path. So it was being included, but from the wrong location. This is my fault for using relative include paths in the first place. Don't do that, this is why.)

The way it sometimes scrolls around right as you click is similar to what Win7 file explorer does. I don't know how WinSCP works internally, but if it's using some Windows widget, that's where the behavior might come from. I don't write many visual applications in Windows but I can imagine such a thing happening.

Anyway, be careful when you click, in Windows 7 at least.

Thanks for your report. Will try to reproduce it.

My apologies for resurrecting an old thread, but I'm able to reproduce this on-demand using Commander interface in 5.7.7 (Build 6257) running under Windows 10.

Here is a 13 second clip showcasing the issue: <invalid hyperlink removed by admin>

In case you can't see the video, you can recreate using the following steps:

Let me know if you need any other info to help track this down.

This bug has been added to the tracker:
https://winscp.net/tracker/1438

Can you send me an email, so I can send you back a development version of WinSCP for testing? Please include link back to this topic in your email. Also note in this topic that you have sent the email. Thanks.


You will find my address (if you log in) in my forum profile.