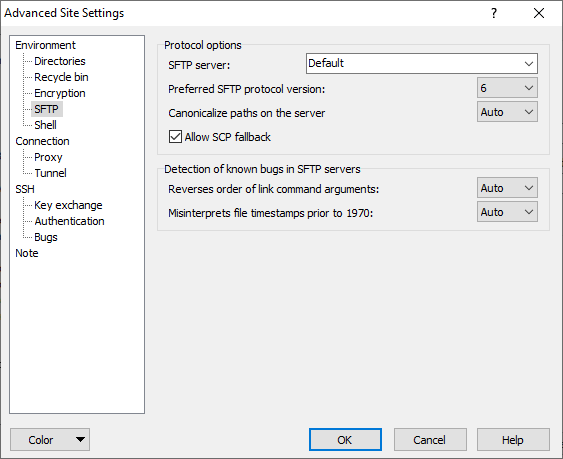 To reveal this page you need to select SFTP file protocol on Login dialog.

Use SFTP server to specify path to SFTP server binary. Keep value Default to use the default SFTP server. Usually there will not be more SFTP servers to choose from. However you may find the option useful to change the way the SFTP server is launched. Particularly you may want to change user (known as su).1

Use Preferred SFTP protocol version to configure maximal version of SFTP protocol that WinSCP will attempt to use. WinSCP will seamlessly downgrade to any lower version that the server supports. The only reason, that you may want to change the option for, is bug either in SFTP server or WinSCP itself specific to particular version of the protocol.

Adhering to the SFTP specification, when changing directory, WinSCP asks the SFTP server to canonicalize the new path.2 With OpenSSH (and possibly other) SFTP servers this has side effect that the symbolic links in the path are resolved, what can complicate navigation back. Some minor SFTP servers even have this functionality broken. For either of these reasons, you may want to turn the canonicalization off, by unchecking Canonicalize paths on the server.

The box allows you to configure the bugs WinSCP should expect to see in the SFTP server.

WinSCP can work around the bugs of major SFTP servers only. There is many more known bugs in SFTP server implementations. Read more about interoperability with SFTP servers.

The SFTP command to create a link has two arguments: the path the link should point to and the path of the link itself. Some servers incorrectly expects the arguments in reversed order.

If the bug is detected, WinSCP will reverse the order of the arguments too.

While specification for SFTP protocol version 3 and older defines file timestamp to be unsigned 32-bit number representing number of seconds from Jan 1, 1970 in UTC, at least OpenSSH interprets it as signed number. The result is that files on the server with timestamps before 1970 will be interpreted by WinSCP as times after 2038. As it is probably quite common bug, it is currently considered to apply for all servers. Set the option to Off if it does not for your server.