Pageant is an SSH authentication agent. It holds your private keys in memory, already decoded, so that you can use them often without needing to type a passphrase.1

Pageant is included in WinSCP installation package. You can also download it separately from WinSCP download page.

To start Pageant, go to Tools > Pageant on Login dialog.

Before you run Pageant, you need to have a private key in .ppk format.

When you run Pageant, it will put an icon of a computer wearing a hat into the System tray. It will then sit and do nothing, until you load a private key into it. (You may need to use Windows’ Show hidden icons arrow to see the Pageant icon.) 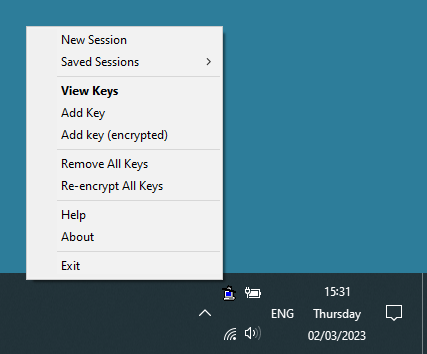 If you click the Pageant icon with the right mouse button, you will see a menu. Select View Keys from this menu. The Pageant main window will appear. (You can also bring this window up by double-clicking on the Pageant icon.)

The Pageant window contains a list box. This shows the private keys Pageant is holding. When you start Pageant, it has no keys, so the list box will be empty. After you add one or more keys, they will show up in the list box.

To add a key to Pageant, press the Add Key button. Pageant will bring up a file dialog, labelled Select Private Key File. Find your private key file in this dialog, and press Open.

Pageant will now load the private key. If the key is protected by a passphrase, Pageant will ask you to type the passphrase. When the key has been loaded, it will appear in the list in the Pageant window.

Now start WinSCP and open an SSH session to a site that accepts your key. WinSCP will notice that Pageant is running, retrieve the key automatically from Pageant, and use it to authenticate. You can now open as many WinSCP sessions as you like without having to type your passphrase again.

WinSCP can be configured not to try to use Pageant, but it will try by default.

If you want Pageant to stay running but forget all the keys it has acquired, select Remove All Keys from the System tray menu.

The Pageant main window appears when you left-click on the Pageant system tray icon, or alternatively right-click and select View Keys from the menu. You can use it to keep track of what keys are currently loaded into Pageant, and to add new ones or remove the existing keys. 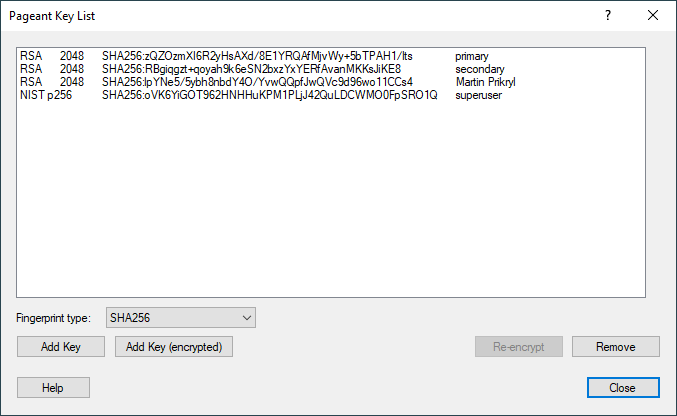 For each key, the list box will tell you:

To add a key to Pageant by reading it out of a local disk file, press the Add Key button in the Pageant main window, or alternatively right-click on the Pageant icon in the system tray and select Add Key from there.

This is not the only way to add a private key to Pageant. You can also add one from a remote system by using agent forwarding; see section 9.4 for details.

If you need to remove a key from Pageant, select that key in the list box, and press the Remove Key button. Pageant will remove the key from its memory.

Pageant can be made to do things automatically when it starts up, by specifying instructions on its command line. If you’re starting Pageant from the Windows GUI, you can arrange this by editing the properties of the Windows shortcut that it was started from.

If Pageant is already running, invoking it again with the options below causes actions to be performed with the existing instance, not a new one.

Pageant can automatically load one or more private keys when it starts up, if you provide them on the Pageant command line. Your command line might then look like:

If the keys are stored encrypted, Pageant will request the passphrases on startup.

If Pageant is already running, this syntax loads keys into the existing Pageant.

You can specify the --encrypted option to defer decryption of these keys.

You can arrange for Pageant to start another program once it has initialized itself and loaded any keys specified on its command line. This program (perhaps a WinSCP, PuTTY, or whatever) will then be able to use the keys Pageant has loaded.

You do this by specifying the -c option followed by the command, like this:

Windows’s own port of OpenSSH uses the same mechanism as Pageant to talk to its SSH agent (Windows named pipes). This means that Windows OpenSSH can talk directly to Pageant, if it knows where to find Pageant’s named pipe.

When Pageant starts up, it can optionally write out a file containing an OpenSSH configuration directive that tells the Windows ssh.exe where to find Pageant. If you include this file from your Windows SSH configuration, then ssh.exe should automatically use Pageant as its agent, so that you can keep your keys in one place and have both SSH clients able to use them.

The option is --openssh-config, and you follow it with a filename.

To refer to this file from your main OpenSSH configuration, you can use the Include directive. For example, you might run Pageant like this (with your own username substituted, of course):

and then add a directive like this to your main .ssh\config file (assuming that lives in the same directory that you just put pageant.conf):

Note: this technique only works with Windows’s port of OpenSSH, which lives at %SYSTEMROOT%\System32\OpenSSH\ssh.exe if you have it installed. (If not, it can be installed as a Windows optional feature, e.g., via Settings > Apps & features > Optional features > Add a feature > OpenSSH Client.)

There are other versions of OpenSSH for Windows, notably the one that comes with Windows Git. Those will likely not work with the same configuration, because they tend to depend on Unix emulation layers like MinGW or MSys, so they won’t speak Windows native pathname syntax or understand named pipes. The above instructions will only work with Windows’s own version of OpenSSH.

So, if you want to use Windows Git with an SSH key held in Pageant, you’ll have to set the environment variable GIT_SSH, to point at a different program. You could point it at C:\Windows\System32\OpenSSH\ssh.exe once you’ve done this setup – but it’s just as easy to point it at Plink!

Start Pageant with the --keylist option to show the main window as soon as it starts up.

Agent forwarding is a mechanism that allows applications on your SSH server machine to talk to the agent on your client machine.

Note that at present, whether agent forwarding in SSH is available depends on your server. Pageant’s protocol is compatible with the OpenSSH server, but the ssh.com server uses a different agent protocol, which WinSCP does not yet support.

If this has worked, your applications on the server should now have access to a Unix domain socket which the SSH server will forward back to WinSCP, and WinSCP will forward on to the agent. To check that this has actually happened, you can try this command on Unix server machines:

If the result line comes up blank, agent forwarding has not been enabled at all.

Now if you run ssh on the server and use it to connect through to another server that accepts one of the keys in Pageant, you should be able to log in without a password:

If you enable agent forwarding on that SSH connection as well (see the manual for your server-side SSH client to find out how to do this), your authentication keys will still be available on the next machine you connect to – two SSH connections away from where they’re actually stored.

In addition, if you have a private key on one of the SSH servers, you can send it all the way back to Pageant using the local ssh-add command:

and then it’s available to every machine that has agent forwarding available (not just the ones downstream of the place you added it).

You can add keys to Pageant without decrypting them. The key file will be held in Pageant’s memory still encrypted, and when a client program first tries to use the key, Pageant will display a dialog box prompting for the passphrase so that the key can be decrypted.

This works the same way whether the key is used by an instance of WinSCP or PuTTY running locally, or a remote client connecting to Pageant through agent forwarding.

To start Pageant up in the first place with encrypted keys loaded into it, you can use the --encrypted option on the command line. For example:

After a key has been decrypted for the first use, it remains decrypted, so that it can be used again. The main window will list the key with (re-encryptable) after it. You can revert it to the previous state, where a passphrase is required, using the Re-encrypt button in the Pageant main window.

Caution: When Pageant displays a prompt to decrypt an already-loaded key, it cannot give keyboard focus to the prompt dialog box. As far as we know this is a deliberate defensive measure by Windows, against malicious software. So make sure you click in the prompt window before typing your passphrase, or else the passphrase might be sent to somewhere you didn’t want to trust with it!

Using Pageant for public-key authentication gives you the convenience of being able to open multiple SSH sessions without having to type a passphrase every time, but also gives you the security benefit of never storing a decrypted private key on disk. Many people feel this is a good compromise between security and convenience.

It is a compromise, however. Holding your decrypted private keys in Pageant is better than storing them in easy-to-find disk files, but still less secure than not storing them anywhere at all. This is for two reasons:

Similarly, use of agent forwarding is a security improvement on other methods of one-touch authentication, but not perfect. Holding your keys in Pageant on your Windows box has a security advantage over holding them on the remote server machine itself (either in an agent or just unencrypted on disk), because if the server machine ever sees your unencrypted private key then the sysadmin or anyone who cracks the machine can steal the keys and pretend to be you for as long as they want.

However, the sysadmin of the server machine can always pretend to be you on that machine. So if you forward your agent to a server machine, then the sysadmin of that machine can access the forwarded agent connection and request signatures from any of your private keys, and can therefore log in to other machines as you. They can only do this to a limited extent – when the agent forwarding disappears they lose the ability – but using Pageant doesn’t actually prevent the sysadmin (or hackers) on the server from doing this.

Therefore, if you don’t trust the sysadmin of a server machine, you should never use agent forwarding to that machine. (Of course you also shouldn’t store private keys on that machine, type passphrases into it, or log into other machines from it in any way at all; Pageant is hardly unique in this respect.)