The Authentication page on the Advanced Site Settings dialog allows you to configure authentication options of SSH protocol. 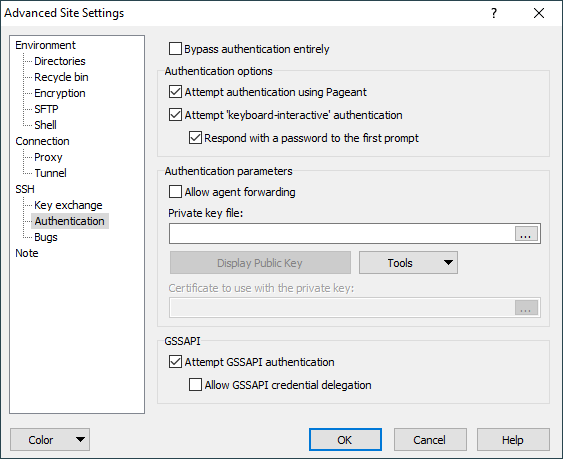 In SSH, it is in principle possible to establish a connection without using SSH’s mechanisms to identify or prove who you are to the server. Some servers may simply require no authentication whatsoever.

By default, WinSCP assumes the server requires authentication (we’ve never heard of one that doesn’t), and thus must start this process with a username. If you find you are getting username prompts that you cannot answer, you could try enabling Bypass authentication entirely. However, most SSH servers will reject this.

This is not the option you want if you have a username and just want WinSCP to remember it; It’s also probably not what if you’re trying to set up passwordless login to a mainstream SSH server; depending on the server, you probably wanted public-key authentication or perhaps GSSAPI authentication. (These are still forms of authentication, even if you don’t have to interact with them.)1

If this option is enabled, then WinSCP will look for Pageant and attempt to authenticate with any suitable public keys Pageant currently holds.

This behavior is almost always desirable, and is therefore enabled by default. In rare cases you might need to turn it off in order to force authentication by some non-public-key method such as passwords.1

‘Keyboard-interactive’ is a flexible authentication method using an arbitrary sequence of requests and responses; so it is not only useful for challenge/response mechanisms such as S/Key, but it can also be used for (for example) asking the user for a new password when the old one has expired.1

WinSCP leaves this option enabled by default, but supplies a switch to turn it off in case you should have trouble with it. If your server uses keyboard-interactive authentication to ask for your password only, and you wish to allow WinSCP to reply with password entered on Login dialog, tick Respond with password to the first prompt.

This option allows the SSH server to open forwarded connections back to your local copy of Pageant. If you are not running Pageant, this option will do nothing. Learn more about agent forwarding.

You can use Pageant so that you do not need to explicitly configure a key here.

If a private key file is specified here with Pageant running, WinSCP will first try asking Pageant to authenticate with that key, and ignore any other keys Pageant may have. If that fails, WinSCP will ask for a passphrase as normal. You can also specify a public key file in this case (in RFC 4716 or OpenSSH format), as that’s sufficient to identify the key to Pageant, but of course if Pageant isn’t present WinSCP can’t fall back to using this file itself.

The passphrase cannot be entered in advance in session settings and thus it cannot be saved to site. If you need to login to server automatically without prompt, generate a key without passphrase. Use this method carefully and only under special circumstances.

If you select a key file in a different format (OpenSSH or ssh.com), WinSCP will offer you to convert the key to PuTTY format.

Use the button Display Public Key to display public key in a format suitable for pasting into OpenSSH authorized_keys file.

The command Tools > Generate New Key Pair with PuTTYgen starts PuTTYgen, in which you can generate a new private key pair. After you save your new key pair in PuTTYgen, WinSCP will detect it and automatically insert a path to the new key file into Private key file box.

The GSSAPI authentication is a mechanism which delegates the authentication exchange to a library elsewhere on the client machine, which in principle can authenticate in many different ways but in practice is usually used with the Kerberos single sign-on protocol to implement passwordless login.

WinSCP supports two forms of GSSAPI-based authentication. In one of them, the SSH key exchange happens in the normal way, and GSSAPI is only involved in authenticating the user. The checkbox labelled Attempt GSSAPI authentication controls this form.

If one or both of these controls is enabled, then GSSAPI authentication will be attempted in one form or the other, and (typically) if your client machine has valid Kerberos credentials loaded, then WinSCP should be able to authenticate automatically to servers that support Kerberos logins.

If both of those checkboxes are disabled, WinSCP will not try any form of GSSAPI at all, and the rest of the GSSAPI box is unused.

GSSAPI credential delegation is a mechanism for passing on your Kerberos (or other) identity to the session on the SSH server. If you enable this option, then not only will WinSCP be able to log in automatically to a server that accepts your Kerberos credentials, but also you will be able to connect out from that server to other Kerberos-supporting services and use the same credentials just as automatically.

This option is the Kerberos analogue of SSH agent forwarding.