The Applications Integration page on the Preferences dialog allows user to configure how WinSCP integrates with other applications, particularly with PuTTY or other terminal clients. 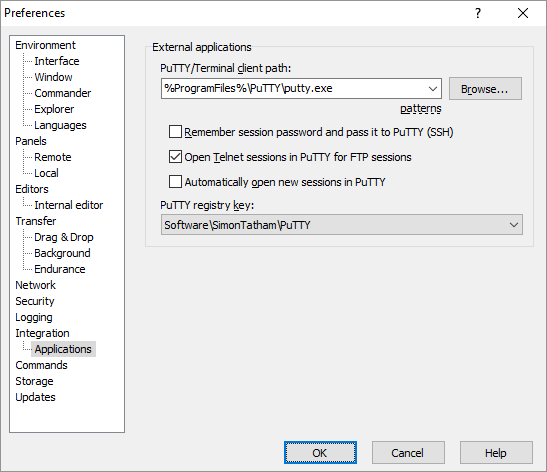 Using PuTTY/Terminal client path box you can specify local path to PuTTY or other terminal client application that is used with Open in PuTTY function. You can also use Microsoft Store app aliases here, for example the wt.exe for Windows Terminal.

Optionally, you can use following patterns in the path:

If pattern !@ is not used, parameter -load <site> is automatically added to the command.

If pattern !P is not used, and password is known, parameter -pw <password> is automatically added to the command.

Check Remember session password and pass it to PuTTY checkbox to make WinSCP keep session password in memory and pass it to PuTTY in command-line argument when using Open in PuTTY function (see above for details). However better approach would be to use public key authentication together with Pageant. The option is disabled, when the !P pattern is used in the terminal client path box, as it implies that the password is remembered.

Use PuTTY registry key selection lets you choose registry key, where WinSCP exports its session settings, to be used by terminal client. WinSCP exports settings in PuTTY format, which is also used by many of its clones, such as KiTTY. If your terminal client does not support this format, you need to use respective patterns (i.e. !@ and !U) in terminal client path box as an alternative way to pass the settings. The registry key path is also used by WinSCP when importing sites. The option is not available in Microsoft Store installation, where WinSCP uses only command-line switches to pass a limited set of session settings to PuTTY.