The Connection page on the Advanced Site Settings dialog allows you to configure general protocol-independent options for the connection. 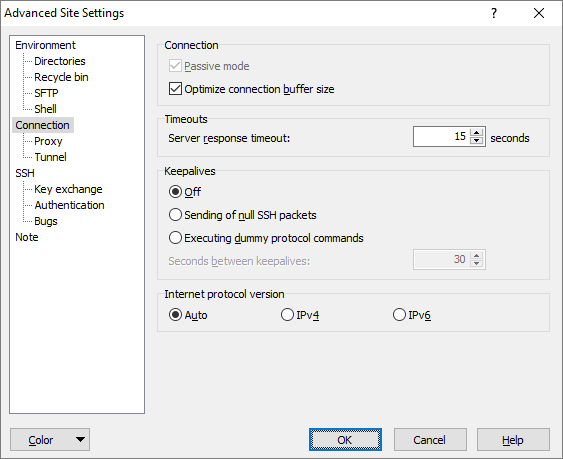 Use Passive mode to toggle between passive and active FTP connection mode. Passive mode is selected by default. WinSCP will try the other mode, if the selected mode does not work. The option is supported only with FTP protocol.

The Optimize connection buffer size enables optimization of socket buffer size. It greatly improves transfer speed. Disable it only when experiencing problems. The option is not available with WebDAV protocol.

By the Server response timeout you define how long should WinSCP wait for an answer from the server before displaying window with option to Abort the connection. Note that the window does not block the waiting, so when it is displayed and the response is finally received it disappears itself.

WinSCP can automatically reconnect session, if the server is not responding too long.

Some servers (and also firewalls and routers on the way between the client and the server) disconnect clients if they do not receive any data from it within a defined period. In the Keepalives box, you may order WinSCP to send some dummy data in regular periods to avoid being disconnected. This period is defined with Seconds between keepalives.

WinSCP implements two methods for keepalives. For SFTP and SCP, the basic option is to send SSH-level keepalives implemented by null SSH packets (SSH ignore messages). Some servers may be configured not to count these packets as data and thus they will still disconnect clients sending them.

The option is not available with WebDAV and S3 protocols.

Note that keepalives are not always helpful. They help if you have a firewall which drops your connection after an idle period; but if the network between you and the server suffers from breaks in connectivity then keepalives can actually make things worse. If a session is idle, and connectivity is temporarily lost between the endpoints, but the connectivity is restored before either side tries to send anything, then there will be no problem – neither endpoint will notice that anything was wrong. However, if one side does send something during the break, it will repeatedly try to re-send, and eventually give up and abandon the connection. Then when connectivity is restored, the other side will find that the first side doesn’t believe there is an open connection any more. Keepalives can make this sort of problem worse, because they increase the probability that WinSCP will attempt to send data during a break in connectivity. (Other types of periodic network activity can cause this behavior; in particular, re-keys can have this effect.)

This option allows the user to select between the old and new Internet protocols and addressing schemes (IPv4 and IPv6). The default setting is Auto, which means WinSCP will do something sensible and try to guess which protocol you wanted. (If you specify a literal Internet address, it will use whichever protocol that address implies. If you provide a hostname, it will see what kinds of address exist for that hostname; it will use IPv6 if there is an IPv6 address available, and fall back to IPv4 if not.)

If you need to force WinSCP to use a particular protocol, you can explicitly set this to IPv4 or IPv6.2

The option is not available with WebDAV and S3 protocols.