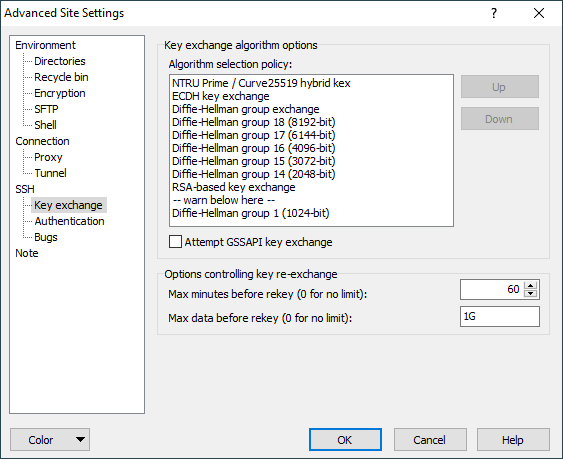 Key exchange occurs at the start of an SSH connection (and occasionally thereafter); it establishes a shared secret that is used as the basis for all of SSH’s security features. It is therefore very important for the security of the connection that the key exchange is secure.1

Key exchange is a cryptographically intensive process; if either the client or the server is a relatively slow machine, the slower methods may take several tens of seconds to complete.

If connection startup is too slow, or the connection hangs periodically, you may want to try changing these settings.

If you don’t understand what any of this means, it’s safe to leave these settings alone.

WinSCP supports a variety of key exchange methods, and allows you to choose which one you prefer to use; configuration is similar to cipher selection.

If the first algorithm WinSCP finds is below the warn below here line, you will see a warning box when you make the connection, similar to that for cipher selection.

WinSCP supports a set of key exchange methods that also incorporates GSSAPI-based authentication. They are enabled with the Attempt GSSAPI key exchange checkbox.

The advantage of doing GSSAPI authentication as part of the SSH key exchange is apparent when you are using credential delegation. The SSH key exchange can be repeated later in the session, and this allows your Kerberos V5 credentials (which are typically short-lived) to be automatically re-delegated to the server when they are refreshed on the client. (This feature is commonly referred to as “cascading credentials”.)

If your server doesn’t support GSSAPI key exchange, it may still support GSSAPI in the SSH user authentication phase. This will still let you log in using your Kerberos credentials, but will only allow you to delegate the credentials that are active at the beginning of the session; they can’t be refreshed automatically later, in a long-running session.

Another effect of GSSAPI key exchange is that it replaces the usual SSH mechanism of permanent host keys. So if you use this method, then you won’t be asked any interactive questions about whether to accept the server’s host key. Instead, the Kerberos exchange will verify the identity of the host you connect to, at the same time as verifying your identity to it.

If the session key negotiated at connection startup is used too much or for too long, it may become feasible to mount attacks against the SSH connection. Therefore, the SSH protocol specifies that a new key exchange should take place every so often; this can be initiated by either the client or the server.

While this renegotiation is taking place, no data can pass through the SSH connection, so it may appear to “freeze”. Usually the same algorithm is used as at the start of the connection, with a similar overhead.

These options control how often WinSCP will initiate a repeat key exchange (“rekey”).

Max minutes before rekey specifies the amount of time that is allowed to elapse before a rekey is initiated. If this is set to zero, WinSCP will not rekey due to elapsed time. The SSH protocol specification recommends a timeout of at most 60 minutes.

You might have a need to disable time-based rekeys completely for the same reasons that keepalives aren’t always helpful. If you anticipate suffering a network dropout of several hours in the middle of an SSH connection, but were not actually planning to send data down that connection during those hours, then an attempted rekey in the middle of the dropout will probably cause the connection to be abandoned, whereas if rekeys are disabled then the connection should in principle survive (in the absence of interfering firewalls). See keepalives sectionfor more discussion of these issues; for these purposes, rekeys have much the same properties as keepalives. (Except that rekeys have cryptographic value in themselves, so you should bear that in mind when deciding whether to turn them off.) Note, however, that the SSH server can still initiate rekeys.

Max data before rekey specifies the amount of data (in bytes) that is permitted to flow in either direction before a rekey is initiated. If this is set to zero, WinSCP will not rekey due to transferred data. The SSH protocol specification recommends a limit of at most 1 gigabyte.

As well as specifying a value in bytes, the following shorthand can be used:

Disabling data-based rekeys entirely is a bad idea. The integrity, and to a lesser extent, confidentiality of the SSH protocol depend in part on rekeys occurring before a 32-bit packet sequence number wraps around. Unlike time-based rekeys, data-based rekeys won’t occur when the SSH connection is idle, so they shouldn’t cause the same problems.